It made me happy to see a friend rigger in the credits!
Denis Georgiev -----> totally recommended as a rigger visit his site: http://puppettd.com/
Posted by Unknown at 5:31 PM 1 comment: 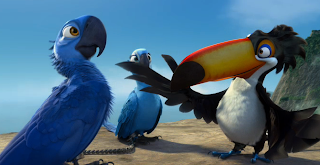 Click on the pic to see the trailer!
Posted by Unknown at 2:32 PM No comments:

Email ThisBlogThis!Share to TwitterShare to FacebookShare to Pinterest
Labels: trailer

Animation Tips and Tricks - How did you get your first job at a studio?

This is a great post found @ Animation Tips and Tricks blog. It gave me some inspiration now that I'm in job hunting mode. After reading this I realized that your dream job is never impossible to get, you just have to work hard to get it.

I'm copying the post exactly as it appears in Animation Tips and Tricks blog. Written by Mark Pullyblank.


The process of landing my first job had a profound effect on my life. I call it the “Build Your Own Crowbar Approach.”

A bit of back-story: I entered animation school at the ripe old age of 33. At that time I had a wife, a one-year-old child and another on the way. People were telling me how difficult the industry was to break into and that I'd probably never be able to feed my family.

I graduated in February 2003, and immediately hit the streets. I began by mailing out 50 demo reels and waited. Nothing. Not a single response. My first thought was, I needed a better cover letter and a flashier DVD jacket. Oh, and color labels! I opened Photoshop and worked through the night, and in the morning I mailed out 25 more reels with new and improved packaging. Problem was, the content was the same, and (no surprise) so were the results.

Two months passed, and I had two hungry children and no job. Around that time a friend showed me some animation from another student who had just landed an internship at Pixar. I couldn't believe what I saw. I initially felt completely dismayed by the high standard of his work, but after I calmed down, Cameron Miyasaki's animation became my personal yardstick. I closed Photoshop and got back to animating. I would bump into people who knew someone who worked in the industry, and I would hunt them down and beg for their feedback.

I called an animator at Radical Games in Vancouver who looked at my work and told me the quality was such that it would be a waste of time to show his supervisor. I fortified my ego and asked him for specifics. He gave me a list of notes and brushed me off. I hung up the phone and worked through the night. The next morning I dropped off a new reel with his revisions. He called me that afternoon and said he'd try to get me in for an interview. It never happened, but I knew I was on the right track. A few days later a friend introduced me (via email) to a character designer at Pixar named Jason Deamer. Through Jason I was put in touch with Victor Navone who graciously agreed to look at my work and provide me with feedback. I was already a big fan and completely blown away to be receiving his input. Over the next few weeks, I slaved over my computer, determined not to waste Victor's time. He was extraordinarily generous with his critiques and my skills began to rapidly improve. During that time, I would occasionally mail out a reel or two, but I was so fixated on the work, I kind of forgot about the job search. Eventually I received a phone call from Brian Moylen, head of the VFX department at Rainmaker Animation. They were gearing up for the first Garfield movie and he invited me in for an interview. It was not only my first interview, but my first response of any kind from the industry.

When I sat down in Brian’s office, he reached into his desk and produced my demo reel. I was struck by what I had submitted... a clear DVD jewel case with a blank CD on which I had scribbled my name and phone number with a sharpie. No inserts, no labels - nothing. When he played my demo reel, I was struck a second time by the absence of my school work. It had been five months since I had graduated, and in that time, I had replaced two years of student work. I landed the job, fed my family and eventually worked my way up to the position of animation supervisor. At one point, shortly after I started working at Rainmaker, a fellow artist approached me and told me the tale of his friend at Radical who talked about a guy who asked him for a critique of his reel and then resubmitted a new reel the following day. Small industry.
Posted by Unknown at 11:52 AM No comments:

I'm so happy that me and my hubby could publish our 10 second reels.

Email ThisBlogThis!Share to TwitterShare to FacebookShare to Pinterest
Labels: trailer

Thanks to my friend Kamal Jasmath for the tip!!!

Posted by Unknown at 5:49 PM No comments:

Helium. from Daniele Zannone on Vimeo.

Posted by Unknown at 5:48 PM No comments: